Piaggio was founded in Genoa in 1884 by twenty-year-old Rinaldo Piaggio. The first activity of Rinaldo’s factory was luxury ship fitting. But by the end of the century, Piaggio was also producing rail carriages, goods vans, luxury coaches and engines, trams and special truck bodies.

World War 1 brought a new diversification that was to distinguish Piaggio activities for many decades. The company started producing aeroplanes and seaplanes. At the same time, new plants were springing up. In 1917 Piaggio bought a new plant in Pisa, and four years later it took over a small plant in Pontedera which first became the centre of aeronautical production (propellers, engines and complete aircraft) and then, after World War II, witnessed the birth of the iconic Vespa.

The war, a radical watershed for the entire Italian economy, was equally important for Piaggio. The Pontedera plant built the state-of-the-art four-engine P 108 equipped with a 1,500-bhp Piaggio engine in passenger and bomber versions. However Piaggio’s aeronautical plants in Tuscany (Pontedera and Pisa) were important military targets and on August 31, 1943 they were razed to the ground by Allied bombers, after the retreating Germans had already mined the pillars of the buildings and irrevocably damaged the plants. 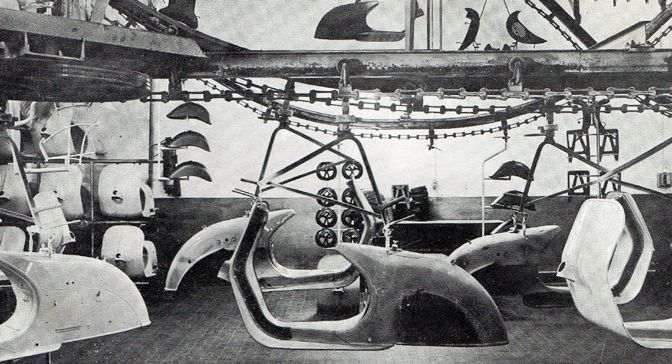 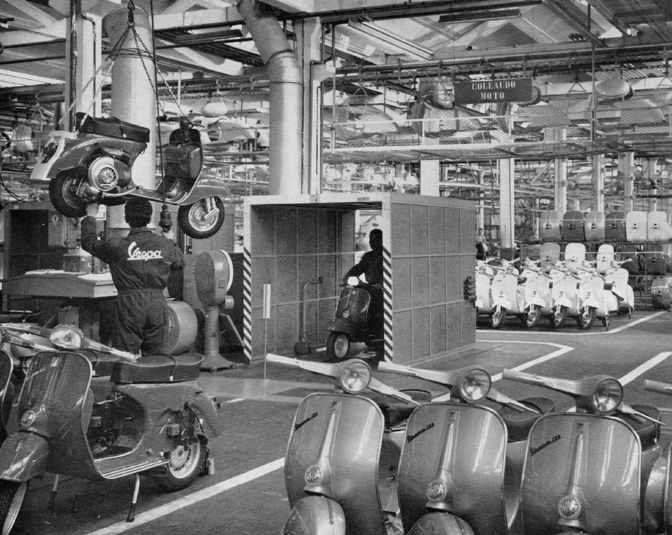 To rebuild the Pontedera plants, Enrico Piaggio asked the Allies, who then occupied part of the grounds and of the buildings still standing, to arrange for the machinery transferred to Germany and Biella in northern Italy to be brought back.

This was done rapidly and Armando and Enrico Piaggio then began the process of rebuilding. The hardest task went to Enrico, who was responsible for the destroyed plants of Pontedera and Pisa. Enrico Piaggio’s decision to enter the light mobility business was based on economic assessments and sociological considerations.

It took shape thanks to the successful co-operation of the aeronautical engineer and inventor Corradino D’Ascanio (1891-1981).

A motor scooter was produced, based on a small motorcycle made for parachutists. The prototype, known as the MP 5, was nicknamed “Paperino” (the Italian name for Donald Duck) because of its strange shape, but Enrico Piaggio did not like it, and he asked Corradino D’Ascanio to redesign it. But the aeronautical designer did not like motorcycles. He found them uncomfortable and bulky, with wheels that were difficult to change after a puncture.

Worse still, the drive chain made them dirty. However, his aeronautical experience found the answer to every problem.To eliminate the chain he imagined a vehicle with a stress-bearing body and direct mesh; to make it easier to ride, he put the gear lever on the handlebar; to make tyre changing easier he designed not a fork, but a supporting arm similar to an aircraft carriage.

Finally, he designed a body that would protect the driver so that he would not get dirty or dishevelled. Decades before the spread of ergonomic studies, the riding position of the Vespa was designed to let you sit comfortably and safely, not balanced dangerously as on a high-wheel motorcycle. Corradino D’Ascanio only needed a few days to refine his idea and prepare the first drawings of the Vespa, first produced in Pontedera in April 1946.

It got its name from Enrico Piaggio himself who, looking at the MP 6 prototype with its wide central part where the rider sat and the narrow “waist”, exclaimed, “It looks like a wasp!” And so the Vespa was born. 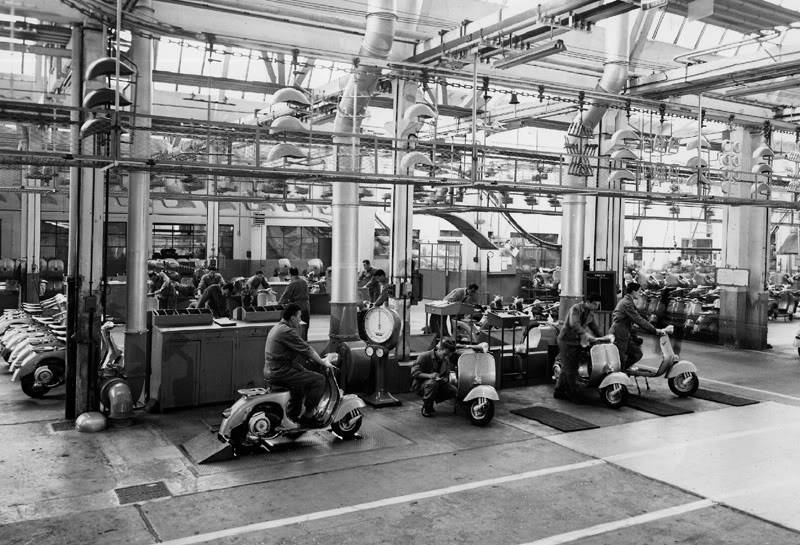 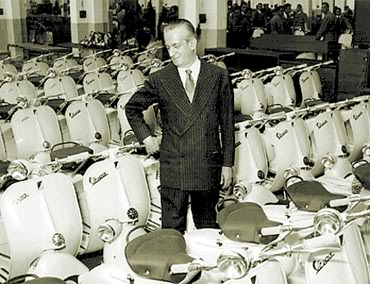 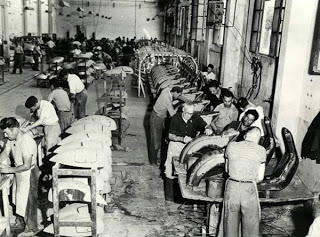 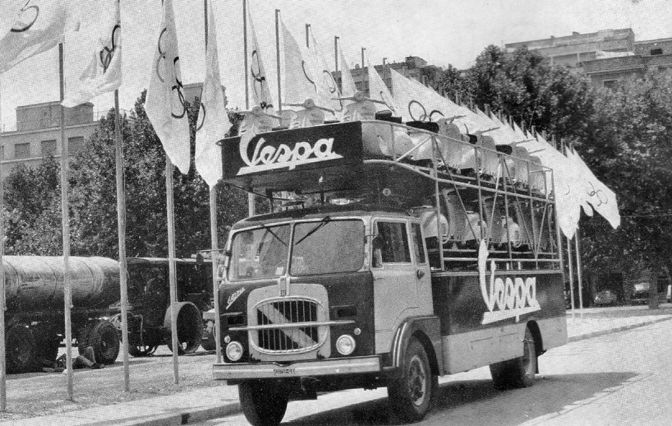 On April 23, 1946 Piaggio & C. S.p.A. filed a patent with the Central Patents Office for inventions, models and brand names at the Ministry of Industry and Commerce in Florence, for “a motorcycle with a rational complex of organs and elements with body combined with the mudguards and bonnet covering all the mechanical parts”.

In a short space of time the Vespa was presented to the public, provoking contrasting reactions. However, Enrico Piaggio did not hesitate to start mass production of two thousand units of the first Vespa 98 cc.

The new vehicle made its society debut at Rome’s elegant Golf Club, in the presence of U.S. General Stone who represented the Allied military government. Italians saw the Vespa for the first time in the pages of Motor (March 24, 1946) and on the black and white cover of La Moto on April 15, 1946.

The Vespa became the Piaggio product par excellence, while Enrico personally tested prototypes and new models. His business prospects transcended national frontiers and by 1953, thanks to his untiring determination, there were more than ten thousand Piaggio service points throughout the world, including America and Asia.

By then the Vespa Clubs counted over 50,000 members, all opposed to the “newborn” Innocenti Lambretta.

No less than twenty thousand Vespa enthusiasts turned up at the Italian “Vespa Day” in 1951. Riding a Vespa was synonymous with freedom, with agile exploitation of space and with easier social relationships. The new scooter had become the symbol of a lifestyle that left its mark on its age: in the cinema, in literature and in advertising, the Vespa appeared endlessly among the most significant symbols of a changing society.

In 1950, just four years from its debut, the Vespa was manufactured in Germany by Hoffman-Werke of Lintorf; the following year licensees opened in Great Britain (Douglas of Bristol) and France (ACMA of Paris); production began in Spain in 1953 at Moto Vespa of Madrid, now Piaggio España, followed immediately by Jette, outside Brussels. 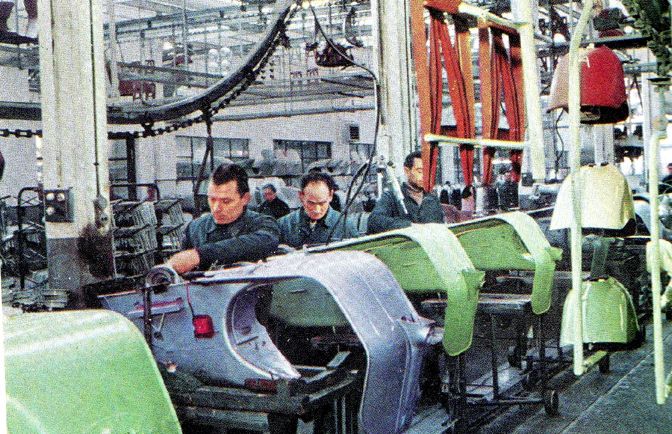 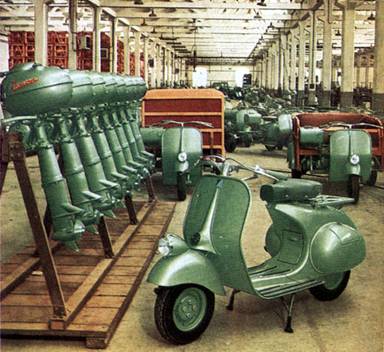 Plants sprang up in Bombay and Brazil; the Vespa reached the USA, and its enormous popularity drew the attention of the Reader’s Digest, which wrote a long article about it. But that magical period was only the beginning. Soon the Vespa was produced in 13 countries and marketed in 114, including Australia, South Africa (where it was known as the “Bromponie”, or moor pony), Iran and China. And it was copied: on June 9, 1957, Izvestia reported the start of production in Kirov, in the USSR, of the Viatka 150 cc, an almost perfect clone of the Vespa.

In 1960 the Vespa passed the two million mark; in 1970 it reached four million, and over ten million in 1988, making it a unique phenomenon in the motorised two-wheeler sector it has sold over 16 million units to date. From 1946 to 1965, the year Enrico Piaggio died, 3,350,000 Vespas were manufactured in Italy alone: one for every fifty inhabitants.

Today, the modern Vespa remains an instantly recognisable design icon, it’s evolution a tribute perseverance and to the quintessentially Italian style, practicality and ingenuity of the original concept.

This website uses cookies to improve your experience while you navigate through the website. The cookies that are categorized as necessary are stored in your browser as they are essential for the working of basic functionalities of the website. We also use third-party cookies that help us analyze and understand how you use this website. These cookies will be stored in your browser only with your consent. You also have the option to opt-out of these cookies. But opting out of some of these cookies may have an effect on your browsing experience.
Necessary Always Enabled